The National Gallery of Canada at the Art Gallery of Alberta is currently featuring Giovanni Battista Piranesi’s haunting and dramatic images from the print series, Carceri d’invenzione (The Imaginary Prisons).

To co-inside with this exhibition I will be giving the Art-in-Context workshop: “The Visual Culture of Incarceration” (re-scheduled for November). This workshop will examine the visual culture of prisons ranging from Piranesi’s Le Carceri, to Jeremy Bentham’s design for the panopticon prison, to Trevor Paglen’s photographs of secret CIA prisons.

Here is a wee taster of what the workshop shall explore:

"The Drawbridge" (1761). National Gallery of Canada

While Piranesi was a successful view (Vedute) artist – creating about 2000 vedute plates in his lifetime for the Grand Tour market – his unfulfilled ambition was to be an architect. Le Carceri (The prisons) are his finest early prints and presented Piranesi with the opportunity to show-off his architectural knowledge. The first edition was printed in 1749, and the second, even darker edition, in 1761. They depict ancient Roman or Baroque ruins converted into fantastic, visionary dungeons filled with mysterious scaffolding and instruments of torture.

The prints series enabled Piranesi to explore the possibilities of perspective and spatial illusion while pushing the medium of etching to its limits. In this section of the workshop we shall explore how Piranesi employed (and subverted) the rules of Linear Perspective and the trade secrets of Roman set designers to create the illusion of an unfolding virtual world beyond the picture plane.

Next we shall explore how Le Caceri has continued to live beyond the limits of the plane by inspiring the work designers, writers and architects across the centuries. As early as 1760 a spectacular set for Rameau’s opera Dardanus copied one of Piranesi’s boundless prison spaces, marking the beginning of a darkly glittering stage and film career for Piranesi’s labyrinths, from Metropolis and Blade Runner to the moving staircases at Hogwarts.

The haphazard and vast prison spaces of the 18th century contrast significantly with the development of the modern prison. The Panopticon (“all-seeing”) was a prison designed by English philosopher and social theorist Jeremy Bentham in 1785. The concept of the design is to allow an observer or gaurd to observe (-opticon) all (pan-) prisoners without the prisoners being able to tell whether they are being watched, thereby conveying what one architect has called the “sentiment of an invisible omniscience.”

Bentham’s perfect prison was never built, yet the panopticon became all the more famous after the postmodernist philosopher Michael Foucault dissected its anatomy of power in his book Discipline and Punish: the Birth of the Prison. Through Foucault’s writings, Panopticism has become a metaphor for modern “disciplinary” societies and its pervasive inclination to observe and normalise. According to Foucault, at all levels of modern life, through all our institutions, right down to the individual level of working and domestic life, a web of power is woven around us, scrutinising us, tracking us, dictating norms and rules of acceptable behaviour upon us. In this section of the workshop we will discover how the panopticon’s sinister logic has manifested itself in strange and horrible destinations from Nazi concentration camps to the design and surveillance of our city streets. 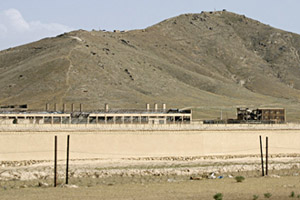 With the beginning of the War on Terror, the CIA set up a network of secret prisons in Afghanistan and elsewhere around the world. Hundreds of ‘ghost prisoners’ have gone through this system. These “black sites” have become synonymous with allegations of torture. The locations of the secret prisons were some of the Bush Administration’s most closely-guarded secrets.

Using unorthodox imaging techniques artist and geographer Trevor Paglen has managed to ‘map’ some of the darkest corners of the CIA’s extraordinary rendition program. http://capmap.fanweb.ca/about-the-project. Through these images we shall lastly explore how Paglen not only manges to trace the CIA’s network of secret prisons but gives their shifting shapes a density that says as much about the future of democracy as it does about the dismal confines of the post-modern prison.

This entry was posted in art in place and the place of art, Events, Presentations, Happenings etc., Prison Art, Visual culture of Incarceration and tagged Foucault, merle patchett, Piranesi, Prisons, set design, Surveillance, The Birth Of the Prison, The Panopticon, Trevor Paglen. Bookmark the permalink.

1 Response to Prison Art: the Visual Culture of Incarceration